The Voyeurism (Offences) (No 2) Bill completed its parliamentary journey on 15th January 2019 and will shortly receive Royal Assent. As the Act will create new criminal offences, the usual convention is that at least two months will pass before the offence comes in to force.

Why was this law passed?

This new law deals with 'upskirting', which is:

'...the practice of taking a photograph up a person’s skirt or clothes without their consent.'

Parliament was told that:

"The law in England and Wales does not contain a specific criminal offence for upskirting, and the practice is currently prosecuted under one of two offences: outraging public decency (OPD) or voyeurism. OPD requires that an offence is: “lewd, obscene and disgusting to such an extent as to outrage minimum standards of decency”; two or more persons (excluding the perpetrator) must be present during the act or display, whether or not they are aware of the act or display or are outraged by it; and it must occur in a public place.

Alternatively, the voyeurism offence, contained in section 67 of the Sexual Offences Act 2003, stipulates that a person commits an offence where, for the purposes of sexual gratification he/she observes, operates equipment with the intention of enabling another person to observe or records a person doing a private act, knowing the person does not consent. The offence also covers installing equipment to enable either themselves, or another person, to commit an offence of voyeurism."

Concerns have been expressed that these laws are inadequate in response to upskirting due to the legal requirements necessary to bring the action within the scope of one of the 2 possible offences. Further, as neither of the two options is a sexual offence, any offender will avoid notification requirements (commonly referred to as being put on the sex offenders register).

So, what will change?

A new section 67A will be inserted into the Sexual Offences Act 2003.

New section 67A subsection 1 would mean that a person (A) commits an offence if they operate equipment beneath the clothing of another person (B) to allow either themselves or another person (C) to observe person B’s genitals or buttocks or the underwear covering them, in circumstances in which they would otherwise not be visible.

For both offences person A would operate equipment or record an image without B’s consent and without reasonably believing that B consented. In addition, under subsection 3 the purpose of person A in operating equipment (subsection 1) or recording an image (subsection 2) must be:

This is only a general overview of the law. For in-depth advice on any criminal law issue, call the team on 0208 808 0774 or alternatively email us on enquiries@ebrattridge.com to discuss your case. 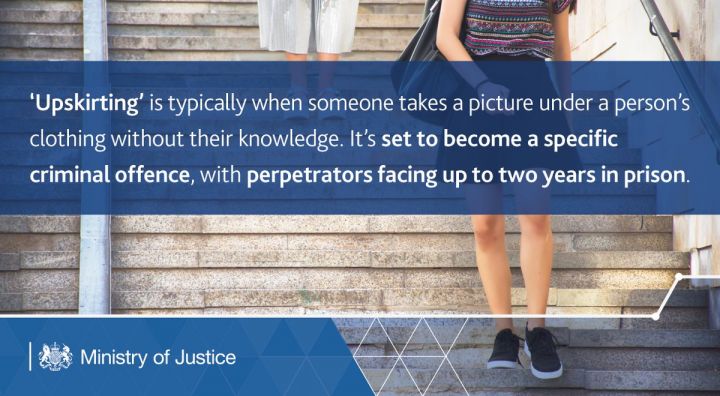